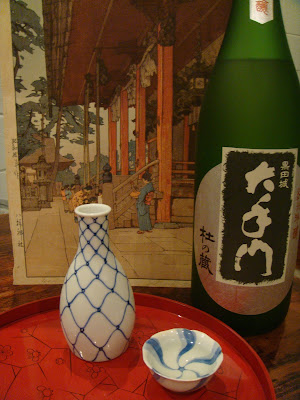 The colour is just a shade towards the straw side of pure water.
At room temperature the aroma is of fermented rice with a hint of plum. The flavour is smooth and even with ever so slight astringency. The sake disappears down the throat leaving a glimmer of aftertaste.
At 40C the flavour has developed more life, still with slight astringency and more developed aftertaste.
I regret there is no "Ke-no-sakana" today.

The woodblock print at the back is "Yasaka shrine" printed 1935 by Hiroshi Yoshida, one of greatest artists of the "Shin hanga" style. His prints are highly valued both within Japan and throughout the western world. Morinokura is situated in Kurume, Fukuoka pref. which was the birth place of Hiroshi Yoshida in 1876.
Posted by sakae at 1:17 PM No comments: 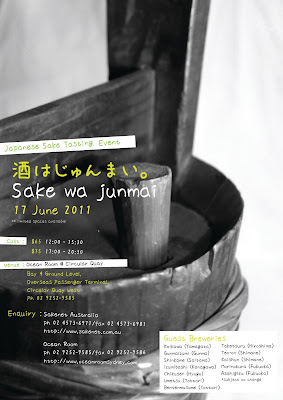 As per above poster we will conduct a sake tasting event.
Each session is limited to 80 people.
Smorgasbord meal is provided and about 40 different sakes for tasting.
You can meet representatives from 12 guest breweries.
Please book early to avoid disapointment.
Posted by sakae at 9:04 PM No comments:

Email ThisBlogThis!Share to TwitterShare to FacebookShare to Pinterest
Labels: Events 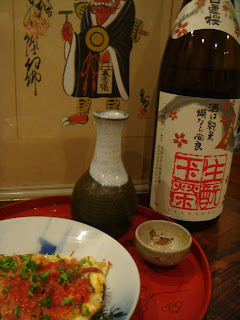 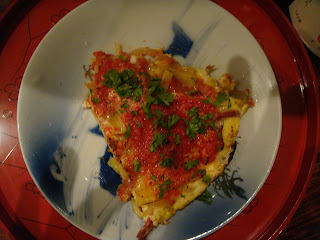 Slice a mixture of your favorite vegetables and sausage or bacon or ham into match stick sized pieces. Briefly stir fry with salt and pepper (the vegetables should still be slightly crisp) and set aside.
Lightly beat the eggs and heat in a frypan and add the vegetable mixture before the eggs start to set.
Cover with lid or foil until the eggs set.
Posted by sakae at 12:45 PM No comments: 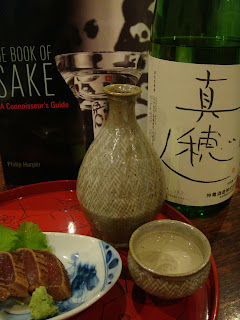 This brewery does not publish the brewer's year but this sake is at least 4 years old. It has been made from Gohyakumangoku(one of well known true brewers' rice), which was grown using only recycled natural products such as fallen leaves etc as mulch.

The sake is a pale straw colour and at room temperature has a pleasant aroma suggestive of fermented rice. The flavour at this temperature is clean and uncomplicated with a hint of fennel leaving a faint aftertaste.
At around 40C the flavour become more pronounced and at the same time integrated, smooth and more rounded with more aftertaste.
This sake is easy to drink both at room temperature and around 40C.
The book in the background of the picture is a connoisseur's guide to sake by Philip Harper, a master brewer at Tamagawa, Kyoto.
By the way the tokkuri(sake bottle) and guinomi(cup) were made by Tatsuzo Shimaoka who was a living national treasure from Mashiko and were a wedding present from my closest friend. 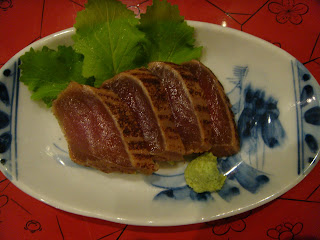 Marinate your tuna in soy sauce with dash of mirin for half to one day.
Remove from the marinade and pat dry.
Sear the outside with a blow torch or in a frypan. The inside remains raw.
Slice and serve with wasabi.
Posted by sakae at 11:34 AM No comments: 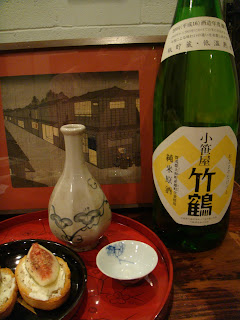 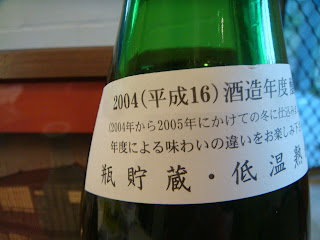 This sake is the colour of straw.
At room temperature the aroma is faintly reminiscent of rice. The taste is of warm rice and clean on the palate with a hint of pineapple around the edges. On swallowing it leaves a slightly sharp after taste that melts away.
At 40C this sake has a pleasant mellow flavour with more pineapple. It gives a strong hit immediately which remains after swallowing.
We have only 5 bottles left and the new stock will be 20BY(2008). 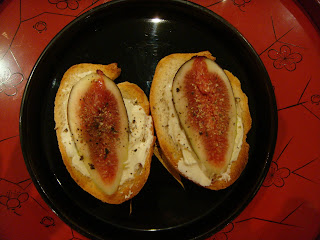 Slice a baguette and toast lightly.
Spread the slices with cream cheese and and finish with fig on the top.
Posted by sakae at 11:19 AM No comments: