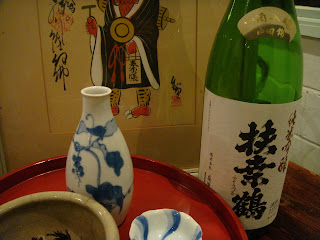 This sake has stood in a cellar for 2months since it was opened.
At room temperature the flavour has a sweetness balanced by a slight astringency and definite spicy after taste.
At about 40°C the taste becomes more mellow but still with a bite. The flavour at this temperature seems to roll off the palate with the spices slowly fading away. 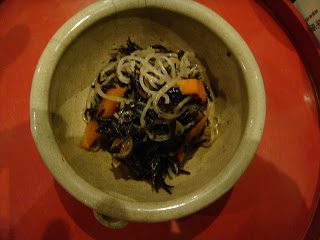 Ke-no-sakana "Hijiki to itokon (Braised hijiki sea weed & yam noodles)"
Soak hijiki in water until they become soft. Slice the carrots.
Drain the hijiki and briefly saute in a little oil with the carrots and yam noodles.
Then lightly flavour with sake, sugar and soy sauce, add water to just cover the  noodle mixture and simmer until the volume is halved (about 30 min.)
Serve with the sake.
Posted by sakae at 12:31 PM No comments:

Together with last week Asahigiku junmai-koshu 9BY 1997
Pale straw in colour, the nose is full and warm with a suggestion of peach.
At room temperature the flavor is full and smooth leaving a slightly piquant after taste. When warmed, the aroma becomes less full and the flavor less complex and cleaner.
For 14 year old sake this one is truly amazing.


BY(Brewer's year which runs from July to June) is given in the year of the emperor's reign.
9BY means sake made Heisei 9. This is the 9th year of the reign of the current emperor and that was 1997 in the western calendar. 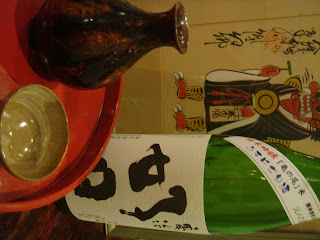 
This is a  slightly cloudy sake.
The aroma has a warm smokey sweetness with a hint  of citrus. At room temperature the flavour is light and well balanced leaving  a lingering after taste suggestive of molasses.
When warmed the aroma is less complex and the flavour is simpler and cleaner.
I find this sake much easier to drink warmed.
The rice from which this sake is made will not grow if the environment is treated with any chemical or unnatural substances. It is really an organic sake although the label does not state this. 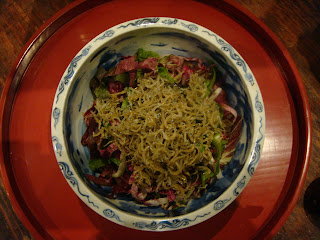 
Slice the radicchio into thin strip. Put the Jako (tiny whitebait) in a small bowl, sprinkle with olive oil and heat on 'instant cook' in the microwave for 1 min. The Jako becomes crispy.
Mix with the radicchio. Dress to your own taste and enjoy.
I like it best with olive oil, lemon, salt and pepper.
Posted by sakae at 12:39 PM No comments: 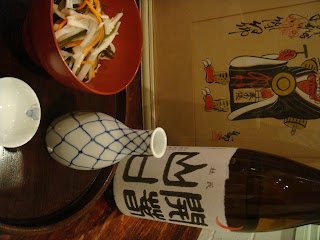 The alcohol is only 14.5% instead of the normal 15~16% but the flavour is clear and full.
Clearly made by master brewer Ryoma Yamaguchi.
When heated the clarity of flavour appears to be slightly blurred but it is rather that it actually becomes fuller and more rounded - very easy to drink.
Compared to Kaishun Kimoto Nishida - using same Yamadanishiki, the delicacy of flavour of this sake can not be denied but it is good value.