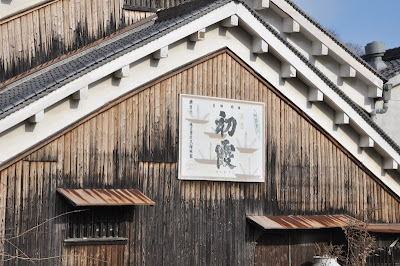 Kubo Honke, a small family brewery in the well-preserved village of Uda, nestled into a mountain valley north of Nara, can be traced back to 1702.
Mr Kubo explains the technical aspects of Kimoto, a natural fermentation process that allows molds to form starch and yeasts to form sugar at the same time.
He also shows off the traditional rake-like poles with which his workers gently mash the rice grains for over two days. This slow mashing is a key part of the Kimoto method, which takes nearly 100days to complete, more than twice as long as modern sake fermentation.


Visitors during winter months - traditional brewing season, when cold temperature suppress harmful bacteria - may think they have found a strange cult. Mr Kubo’s rigorous methods have attracted a young master and a team of “craftsmen”, as he calls them, and their dedication to proper factory hygiene extends to the top of their heads, shaved bald. Katsunori Kato, master brewer of Kubo Honke, is one of them.
Katsunori learned the Kimoto method from Mr Katsuji Ito of Daishichi Brewery, Fukushima Pref., one of greatest master brewers of 20th Century. He then worked in several breweries before joining Kubo Honke. His sakes especially Kimoto-no-Dobu and Suiryu Kimoto are regarded as being among the best of their kind.
Each night during winter the brewers sample their brew.
“They all toast to the satisfaction of linking with past generations,” is the way he puts it.


Takashima brewery is situated in Numazu city, Shizuoka Pref. Their water is pumped up from a 150m deep water channel, bringing water from Mt. Fuji. This channel is estimated to be 300 years old.
When Kazutaka Takashima succeeded to the brewery 6 years ago, he drastically changed the brewing method, now using Box trays for Koji, natural pressing tools, quick cool down after pasteurization etc.
He uses locally grown Yamadanishiki, Fujihomare and Shizuoka yeast No.5, aiming to produce sake that embodies the flavours and spirit of Shizuoka.


Numazu is renowned for its dried fish. Kazutaka wants to produce sake that is a delight to drink with this delicacy.